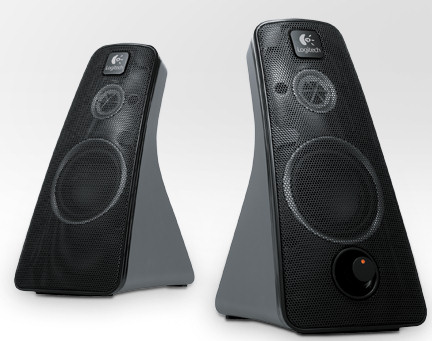 Over the years, I’ve had lots of PCs and a variety of speaker systems. The one thing that appears to be common to most PC speakers is the over-sized subwoofer that is always difficult to find a place for and is often both an eyesore and a wiring hassle.

Since my office is already cluttered enough with my CPU, label printer, mailing scale, external hard drives, printer, scanner, etc. I went looking for a pair of Logitech Z520’s which claimed to offer 360-Degree Sound without the bulky subwoofer.

According to Mark Schneider, vice president and general manager of Logitech’s audio business unit, “Many PC speakers focus sound in one direction, which is fine if you’re always sitting in the same spot., But now with 360-Degree Sound, whether you’re listening to your favorite song on iTunes, watching a video on YouTube, or playing your favorite game, you can enjoy richsound and minimal distortion throughout your room.”

Logitech claims that “Unlike standard PC speakers that use forward-firing drivers, the four new Logitech multimedia speaker systems feature 360-Degree Sound, or omnidirectional acoustics, which creates a substantially wider sweet spot – an especially helpful feature if you often move your computer around your home or office. With speaker drivers that face forward and backwards in each satellite, these four new speakers are designed to transmit sound more consistently over a wider range of space so you never miss a beat no matter where you are in the room”.

My job was to find out if these small desktop speakers could perform reasonably well in my cluttered office environment, thus allowing me to ditch my Altec Lansing speakers with the super-sized subwoofer.

As with most PC speaker systems, setup was a breeze taking less than 5 minutes, (with most of that time spent unwrapping the plastic packaging material). With 26 watts of power these speakers are loud enough for a small office, however they may not be sufficient for a large party at home. The main cables are hardwired to the unit and thus are less than ideal if you need to spread your speakers beyond the allotted range. Extension cables may be found at your local electronics store, but if you need extra distance, like more than the width of your desk, you may want to look elsewhere.

I think my hopes were set a little too high for these speakers, as it probably wasn’t fair of me to expect the Z520’s to be able to replace my $300+ Altec Lansing, Dolby Digital THX (ADA 890) computer speakers. But that’s not to say the little Logitech’s didn’t put up a decent fight.

The Logitech’s performed well for their size and price range with a bright sound , however they lacked the deep bass and fuller sound that I had become used to. The dual direction drivers performed reasonably well, directing sound throughout my home office. The auxiliary input is particularly useful if you want to plug in your iPod or MP3 player without disconnecting the speakers from your computer and a convenient headphone jack is also included.

Overall the Z520 speakers offer a reasonable listening experience at an attractive price for the bedroom or home office environment. They also are a nice set of portable speakers for laptop or presentation use without having the drawbacks of carrying or setting up a subwoofer.

BTW – These speakers also work well for your Xbox, iPod, iPad, PSP and any other device that outputs via a standard male mini plug.

*Images and specifications provided by Logitech