Where Has Auto Design Gone?

“Try stuff that you don’t know will work and that’s how you be creative.”
– Burt Rutan

With the current economic drama that has most folks gasping into brown paper bags as they stumble into the bank, I worry that the next few years will be plagued by relentlessly boring eco-boxes that are sure to be relatively “safe” products for the auto industry. However, this past weekend’s Car Classic ’09: By Air, Land, and Sea, at the Pasadena Art Center College of Design, did wonders to renew my passion for the mechanical marvels that have captured my heart like America in the midst of Beatlemania.

Despite the inevitable quickening of my pulse brought on by cars like the exquisite 1955 Mercedes 300 SL (which seems to be a regular at these historical car shows), the fiery afterburners from the back-end of the 1953 Fiat 8V Supersonic, and even the sheer ridiculousness and absurdity of cars like the 1958 Goggomobil 400TS Coupe, there were still moments when my aimless wanderings through time were brought to a halt of disappointment: in front of the 2009 BMW M3 Coupe, for example. And in front of the 2009 IAD/Mosler MT 900 GTR Racecar. Sure, these are impressive bits of machinery, and if I had to park just one car in my garage, that M3 would definitely be a contender as a great daily driver and weekend racer combo. But the newbies of the group just seem to lack an essential quality that the wizened seniors all possess in spades: soul.

I think Burt Rutan, winning designer of the XPRIZE competition and keynote speaker at the event, put it best when he was giving a young teenage boy some advice and said, “Try stuff that you don’t know will work and that’s how you be creative.” The space-man with the sideburns has a point. Was anybody really surprised when BMW decided that they’d make another “Ultimate Driving Machine?” Of course not. And how did they do it? They engineered it to be better, and then fit the bits into Bangle’s bungling design. How about the Lambo LP640? Are they really doing anything new and unexpected by upping the horsepower and shedding some weight in their flagship supercar? The only thing that keeps you from yawning at this news is the fact that you’re wetting yourself with excitement to drive the raging bull and then soiling yourself from terror once you actually unleash those ponies on a corner. And yes, that car was engineered to be better, too. 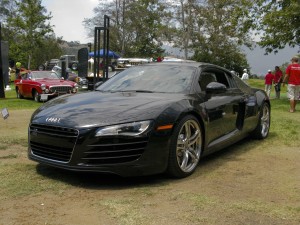 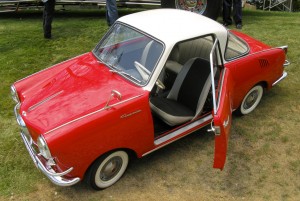 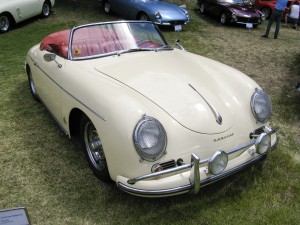 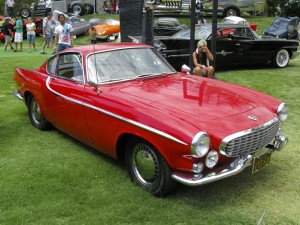 But the beauties of yesteryear weren’t engineered. They were designed. And then they were built. And they tried to do new things. The 1962 Volvo P-1800 Coupe, the follow-up to the miserable failure that was the P1900, which sold only 68 cars, was Volvo’s attempt at making a sport’s car. And it was glorious. It had mini fins for Pete’s sake! The 1957 BMW Isetta 300 Coupe tried putting its door in the wrong place. The 1959 Porsche Convertible D was the only car that made my grandmother long for the days of her youth, and it represented only minor refinement changes like the advent of the roll-up window and reclining seats in a Porsche. And one’s jaw drops when stumbling across a 1988 Aston Martin Lagonda for the first time. What were the Brits thinking? Even Jay Leno’s Eco-Jet, a car “designed to run on anything that can combust with oxygen” as he puts it, or the highly anticipated Tesla Model S, represents an attempt at something new.

And as I walked through this natural 101◦F sauna filled with the men, women, and vehicles that have shaped the car industry over the last hundred years with their fearless innovation, it became clear that somewhere along the way things had changed. Sure, cars still leap from the imaginations of designers and are modeled in clay, but that’s where the paths diverge. Now we’ve succumbed to function over form. While the cars of Sinatra’s generation (the epitome of smooth by which all men measure their own level of coolness), were graceful, stylish, and elegant, they still managed to be bold and sporty; yet today’s vehicles sacrifice the gentle curves that appear sculpted and molded into flowing forms for cost-cutting Henry Ford-like assembly line efficiency that can be engineered by a computer. Sure that bulge in the M3’s bonnet hints at what hides beneath. But let’s face it, some engineer probably walked into the design studio and said, “I haf to haf more room for ze engine heer.” And the designer reluctantly obliged.

Gone are the days where the designer, engineer, and mechanic were one and the same. And, doubtless, in the midst of all of this collaboration, there’s bound to be some cooperation, which gives rise to compromise. But motoring and car design isn’t about compromise. It’s about love. Love for the ridiculous. Love for a door on the front of a car. Love for a car that doubles as a submarine. Love for a car that will barely start. The kind of love that draws a crowd of strangers to break out their tools to help you get your vintage motorcycle restarted when the carburetor floods as you start it up to go home. And while we can certainly lust after a machine that performs spectacularly, like the Lambo, the Bimmer, or even the Mosler, we fall in love with a car because of its imperfections – the very things that computers, the same computers that have come to design most of the new cars on the road today, are programmed to remove from new products.

Indeed only two of the youngsters of the handful of modern cars at the Car Classic give me hope for the future: the aspiring supercar from Audi, and the aging hypercar from McClaren and Merc. Yes, the R8 and the SLR. Though neither of these cars has completely succeeded at accomplishing its goals, it is clear that they have attempted to do what was unexpected. Indeed, humdrum Audi, the boring sedan builder – master of turbo-diesels, all-wheel drive, rallying, and endurance races – has made a luxury supercar that works on the road and the track. And McClaren has managed to transform a relatively subtle, albeit moderately expensive, coupe into a gaudy and ostentatious hypercar that is worthy of attracting the attention of the masters of the track like Ferrari and Lamborghini. Surely these efforts, this “stuff that [they didn’t know would work],” should be applauded. And they have done so while seamlessly blending the passion of their designers with the technology of their engineers.

Jay Leno, when explaining why he was given the privilege of introducing Burt Rutan, said that it is because he is “President of the More Money Than Brains Club.” No Mr. Leno, that’s for the bean counters running the show these days. You get the prize for being a member of the “More Heart Than Brains Club.” We all do. That’s why we gather together to celebrate our cars. That’s why we maintain the pride and joy that lives in our garage. That’s why we spend countless hours bent over our engine blocks or on creepers under our cars. We don’t build cars just to earn money. We design cars so that we can put a piece of ourselves into them. And as I drove home from my blast through the past and reflected upon the future of the auto industry, I sincerely hoped that the powers that be don’t forget that little smidgen of information and inadvertently kill a little bit of me in the process.