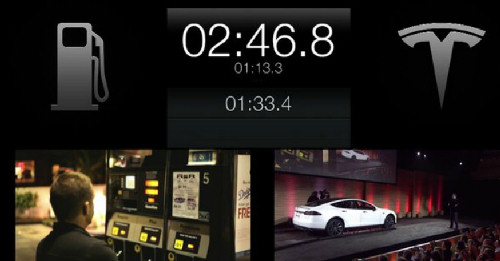 We recently had the opportunity to attend Elon Musk’s unveiling of a technology that promises to change the world of electrical vehicle recharging for long distance trips. The event, which took place at Tesla’s design center in Hawthorne,  Ca., was attended by an impressive gathering of Model S owners with dozens of the pricey electric cars meticulously lined up by a host of valets. Hundreds of Tesla loyalists and members of the media filled a giant ballroom which was decorated with a variety of vehicles including a Model X prototype which was well on it’s way to production.

The catered event featured a showdown to determine who could “fill up” and go on the road more quickly – a gas powered vehicle at a high performance ten gallon a minute pump or a Tesla model S serviced by an in ground robot that would swap out the entire battery pack and even accurately re-torque the securing screws without the driver ever exiting the vehicle.

Elon Musk, the billionaire founder of Paypal, Tesla Motors, Solar City and SpaceX emceed the event in front of a crowd of loyal followers. Pricing an availability information was rather vague, however Mr. Musk stated that the units would be place at select Supercharging Stations across the country. The new Supercharging Stations are being strategically located to allow owners to drive from coast to coast without the normal charging anxiety that concerns many potential electric car purchasers. Supercharging recharges the batteries to a capacity of about 200 miles in thirty minutes, however the battery swapping robot is significantly faster. Supercharging is free for life to all Tesla owners, however usage of the swapping system cost about the same as a tank of gas in a normal car.

Watch the video to see who won, it’s pretty amazing!