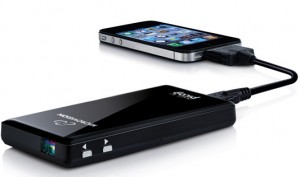 Want to share your games and videos anywhere with a few close friends? Why not do so on a big screen TV that fits in your pocket? We’re walking down a corridor on the main exhibit hall at CES and a video game catches our eye. No, it’s not in one of the big booths or even in a small 10 x 10 booth. It’s two guys walking down the isle with an iPhone and a Microvision ShowWx+ palm-size pico projector. They’re playing the game on the phone and projecting it on the walls of the exhibit hall!

The unique difference between this and other Pico projectors (that were on display), is that Microvision’s unit uses a laser to project the image. As a result, the picture appears sharp from multiple distances without having to focus. 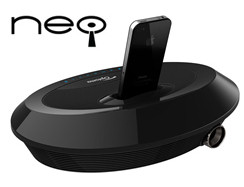 There were a variety of other pint size Pico projectors at the show including a unit by Optoma called the Neo-I that holds an iPhone, includes a speaker and can be aimed to project the image on the ceiling for watching in bed – just right for your bedroom nightstand. Although the unit and its non-docking sister require focusing, they put out more lumens without charging a price premium. If you’ll be making some presentations on the go, check out Optoma’s screen portfolio case. With built in storage for the projector and an included mini-tripod, the case’s built-in 15.5 inch diagonal projector screen makes it perfect for presenting to small groups.

Also noteworthy was iGo’s UP-2020 pocket projector which claims to be the lightest and slimmest pocket projector on the market and projects videos from a Flip video camera, smartphone or other device.  Look for our upcoming reviews.