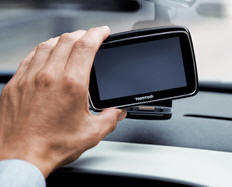 When consumer GPS devices first became available, back when cell-phones were the size of bricks, we were so impressed by their ability to communicate with satellites, that we were willing to put up with their quirks just so that we could get rid of the Thomas Guide that had sat beside us on oh-so-many road-trips over the years. But, now, in this modern era dominated by smart-phones in which all but the most basic of smart-phones have GPS capability, run applications, and can even stream videos, we’ve come to expect, even demand, more from our stand-alone GPS units.

The Go740 Live is TomTom’s latest attempt to meet our guidance expectations. But, despite building a good product and giving a valiant effort, I can’t help but feel that the Go740 Live falls just a little short. Maybe it has something to do with its inability to pronounce nearly all street and city names in the Greater LA area. Granted, this problem could probably be improved if it would just stop cutting off the first syllable of some words, but other times it just sounds like a college student in the middle of Tijuana during the height of spring break, pronouncing “Los Angeles” as “Laus On-hell-es” and “Encino” as “Hee-Haw.” Freeways like the “101 West” are pronounced as “1-West-1.” Nevertheless, the unit’s vocal difficulties are really only a problem if you’re not at all familiar with the area. Given that most people use their GPS unit in their hometowns, maybe the TomTom is meant to be a little windshield-mounted comedian sent to entertain you on your otherwise uneventful morning commute.

The Go740 Live’s main selling point is that extra little word tacked onto the end: “Live.” The unit comes bundled with three months of TomTom’s Live Services right out of the box for $399.95, which includes real-time traffic, fuel prices, local Google search, weather, safety alerts, buddies, and a feature called QuickGPSfix. The traffic information, though very good and taken into account when planning routes, is plagued by the same flaw that troubles all online traffic information, the infrastructure for collecting the data just doesn’t exist yet, and as such, the data is usually a little delayed. And when reading the traffic report aloud, the TomTom says that there’s a delay from the “1-West-1 NB to 1-West-1 NB.” Good thing the map gives more detailed information. More importantly, “Tommy” (as I had decided to name my commuting companion) would often inform me that I was approaching traffic, but that I was still on the fastest route, however the map gave no indication as to the magnitude of the traffic. Yes, it shows that there is a 3.6-mile back-up resulting in a four-minute delay, but I want to know about how slowly I will be going during that time. And, despite taking the traffic delays into account when planning my route, the Go740 Live is hesitant to take me out of my way so as to avoid traffic. On one particularly terrible journey, I was informed that my route had a 46-minute delay, but Tommy insisted that I was on the fastest route. I doubted the veracity of the Go’s claim and switched freeways putting myself on a roundabout route that added about five miles to my trip, but lo-and-behold the Go740 announced that I would arrive more than a half-an-hour earlier than on the original route.

The other services pose similar conundrums for the user. On the one hand, it’s great knowing the weather and being able to search Google for nearby destinations, but I’m confused as to why I should pay the monthly fee of $9.95 when my smart phone can provide me with the same information. That’s not to detract from the quality of this information. The Google search really is a powerful little tool. Feel like Chinese food? Just search for “Chinese” near your current location and you’ll get a list of Chinese restaurants in the area along with their rating, phone number, address, parking situation, accepted forms of payment, dining atmosphere, and bar info. And this search isn’t just limited to restaurants, as you might also get results for a local acupuncturist as well. The safety alerts feature will inform you of traffic and red-light cameras along your route and give you a brief automated warning signal as you approach the sneaky little buggers. “Buddies” seems like TomTom’s version of a social networking utility, allowing you to share your location with your Buddies and to track where they are as well. You can also send messages to one another.

Despite the wow-factor of all of these features, the Go740 Live doesn’t begin to shine until you start using some of the more integrated feautures on your daily commute. Let me paint you a picture of my day: I’d turn on the unit and attach it to the windshield mount – the best one I’ve ever seen. You’d need a herd of tap-dancing elephants and a blow-torch to get this thing back off the windshield once you’ve got that suction cup placed. By the time I’m out of the driveway, the Go740 Live has locked into my position thanks to QuickGPSfix, which allows the unit to find satellites faster. Click the microphone button on the map to launch the voice control and say, “Navigate to an address.” This launches the dialogue function, which allows the user to dictate an address to the TomTom, and as bad as the Go740 is at reading street names, it’s good at understanding the ones that you say. And I’m off. But wait, I forgot that I need gas too. No problem. Just search for the cheapest fuel prices along the route and the TomTom will search for your preferred type of fuel and show not only the brand of gas, but also its price, distance from your current location, rate how far out of your way the gas station is, and the station’s phone number. Be warned though, these prices are usually not accurate as they can be up to five days old. Nevertheless, though the exact price may be off, the station reported to be the least expensive usually is.

And once you’re on your way, the TomTom continues to help you in ways that you didn’t even realize you needed help. Confusing freeway signs that vaguely indicate where you need to go are a thing of the past because the Go740 shows brilliant images that indicate exactly which lane you need to be in for the next maneuver on its 4.3-inch screen. And you don’t have to worry about hidden speed limit signs as the TomTom almost always provides you with this information, and lights up red when you’re speeding. But best of all, the TomTom Go740 Live has the best arrival prediction times that I’ve ever seen. I used to view the arrival time predicted by other GPS units as an inaccurate estimate that I would try to beat in my own private race. Or in the case of the worst units available, the arrival times seemed to be pathetic excuses for an attempt at simple math. But with the Go740, I began to accept the arrival time as a statement of fact. Indeed, I never saw this time change by more than four or five minutes from the initial prediction – even during journeys over an hour long.

So, if the TomTom Go740 Live does all of these things so well, why is it that I don’t really care for it? The main advantage of the Live Services is the traffic, but the traffic infrastructure just isn’t there yet. And in a city who’s traffic is as fickle as Los Angeles’s, you have to monitor the traffic all afternoon prior to your appointment anyway, so what good is it having an alternative route planned if you’re already too late getting in the car? (TomTom does have an online companion that will plan your route with the traffic, but it is still in beta-testing and will only show you the traffic if your departure time is within the next half-an-hour). Once you strip away the TomTom Live Services and save yourself $9.95 a month, all you’re left with is a really expensive GPS unit with a few perks and a lot of quirks that I’d rather not deal with at this price range – like a power jack that takes a contortionist to reach once you’ve mounted the TomTom to the windshield or a Bluetooth connection for your phone that can’t be heard over the road noise. So, if you can live without having the latest and greatest of everything, then consider some of the other, less-expensive, TomTom units. Sure, they may require a dongle to go Live and don’t have voice control for anything except destination input, but many have bigger screens, smaller price tags, and will still get you to your destination. The “in one piece” part is your job.