Review: Rolls-Royce Wraith – The Most Dynamic Rolls Ever

Silence is a precious commodity – something that we’ve all longed for. Whether after a long day of work, or after many hours of non-stop screaming from your children, we’ve all experienced that moment of despair in which we cast our eyes up at the sky and pray for even the briefest of silences. Just a single moment of respite from the chaos would be a priceless treasure that we would value for all eternity. What we wouldn’t give for a minute of silence… 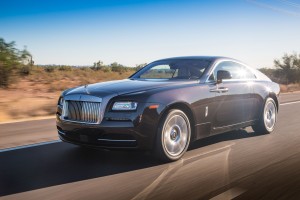 Now imagine that you had your own Fortress of Solitude; a place where you could revel in the wonder of uninterrupted thoughts and restore your Superman-like powers. I imagine that you’d be willing to part with untold fortunes to have such a place at your disposal. By that measure, $300,000 – the price of the new Rolls-Royce Wraith – should be a veritable bargain. In their relentless pursuit of perfection, and possibly in an effort to provide you and your driveway with your own sanctum sanctorum, Rolls has recently introduced the first super-luxe GT cruiser to sport the Spirit of Ecstasy on its hood, and with it, “the most dynamic Rolls-Royce” ever. 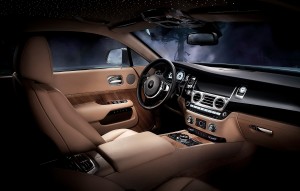 While your first observation when encountering the Wraith will undoubtedly be about its stunning looks, your second will be how quiet it is inside. You can hear a pin drop as you survey the gorgeous interior, lined with wonderfully supple leather, an intuitive control center, beautiful wood paneling with grain at precisely 45-degrees, and an unparalleled attention to detail. But silence at a stand-still is unimpressive. Indeed, it is only when you start up that massive 6.6L twin-turbocharged V12 engine that you can possibly begin to appreciate the stealthiness and predator-like nature of the Wraith. While enthusiastic acceleration briefly fills the cabin with the roar of that mighty engine, conversations while cruising under 80mph can take place at a whisper. Over this speed and you’ll have to raise your voice to a level more appropriate for movie theaters. While this isolation is a defining characteristic of the more yacht-like Rolls-Royce vehicles, it was a pleasant surprise in the Wraith.

In designing the Wraith, Rolls-Royce set out to create the most powerful and dynamic Rolls-Royce ever. They dreamed of a vehicle that could whisk you across the countryside, bring smiles of driving pleasure to your face, and still enable you to arrive at your distant destination fully refreshed. The power part was easy; that twin-turbo V12 puts out 624 bhp and 590 lb-ft of torque, hurtling the 5,380 lb vehicle from 0-60 mph in a mere 4.4 seconds. We’ll ignore the EPA estimate of a combined city/highway 15 mpg, as such trivial details won’t bother most Wraith customers. But how does one deliver a dynamic experience while still maintaining the ride quality of a Rolls-Royce? 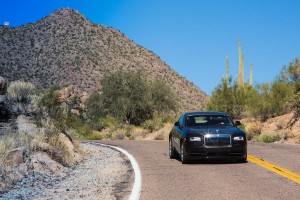 One should not expect the same ride as a Phantom or Ghost, but it would also be unfair to say that the Wraith’s ride quality has been compromised. The air suspension does its job spectacularly well, while still providing the confidence to barrel through canyons like the spirit for which it’s named. Our drive through the rolling desert of Scottsdale, Arizona proved to be an impressive journey. Corners were at our mercy as the Rolls crept up to near triple-digit speeds. While we did experience the body-roll that one would expect of such a heavy car, we were never concerned about losing control. Then again, the Wraith is filled with plenty of driver’s aides to make sure you don’t end up in a ditch including lane-departure warning, heads-up display, and the ground-breaking GPS-assisted 8-speed automatic transmission. This system leverages GPS information to determine the ideal gear for the road ahead, so as to deliver the perfect experience for each corner. While this is something that most of the population will be perfectly content to do without, it was a refreshing experience to have an automatic transmission that never interrupted an otherwise perfect corner with a gear-change.

Other than wishing for stronger brakes, my biggest “complaint” about the Rolls-Royce Wraith is the very silence that I revel. The near-complete isolation from the outside world fools your senses into believing that you are travelling much slower than you are. Cruising through town at 40 mph feels like a snail’s crawl and it’s easy to approach a 50 mph corner at double the speed without realizing it. As far as I’m concerned, that’s not much of a complaint.

So does the Wraith deliver on its promise? That’s a tough question to answer. It’s easily the most dynamic and powerful Rolls-Royce ever built. Moreover, it has an impressive ability to facilitate an enjoyable and spirited drive while allowing the driver to arrive at his or her destination feeling refreshed. And while the Wraith is truly worthy of the Spirit of Ecstasy emblem, were I shopping for a Grand Tourer, I’m not sure that this is the car I’d choose. Its tremendous size dampens its nimbleness – it’s nearly a foot longer than both the Aston Martin Rapide and the Porsche Panamera and more than two feet longer than a Bentley Continental GT. And despite its length, the rear seats still feel a bit cramped. Its extreme price also makes these sportier cars a bit more appealing. Indeed, while the Wraith starts just shy of $300,000, a well-optioned and heavily customized example can make even that price look almost laughably low. But I don’t think that’s the point of the Wraith. It’s not competing for garage space with the Bentley, Aston, or Porsche. Instead, it’s competing for a share of your wallet with a new vacation home in the Alps, an upgrade to your yacht, or that small plane that you’ve had your eye on. Arriving in a Wraith is a statement that says, “I’m a petrol-head with a garage full of my dream cars, but today I wanted to pamper myself in a Rolls-Royce.” And that’s quite a statement for a car.

*Images and Specifications provided by Rolls-Royce