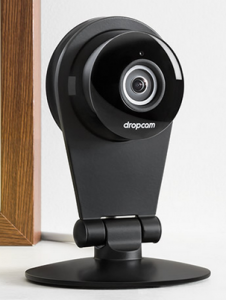 Are you looking for a simple yet effective way to monitor your home or office when you’re not there? We have tested a wide variety of wireless cameras in the past and found most of them to be lacking in image quality or ease of use, however the Dropcam Pro is noteworthy. While its’ predecessor, the original Dropcam HD, had poor image quality and almost unusable night vision the Pro version excels at both.

The Dropcam Pro provides free live streaming video which is accessible through a web app or mobile apps for iOS and Android. Data is sent in an encrypted format to the cloud that is accessed via a user login and password or can be shared as a public stream. There are two types of signals, live and recorded, however recording is done via an extra cost option after the initial 30 day trial period. The recording service is rather expensive and ranges from $9.99 to $29.99 per month (per camera), with discounts for annual subscriptions.

We tested the Pro version against the original and the difference was literally like night and day. We also tested the Dropcam Pro against hardwired units from Swan, Wilife and others. We setup three cameras in multiple residential locations and the primary problems that we encountered were related more to bandwidth issues than to the setup process itself.

The biggest issues with wireless cameras are that they must have a strong and consistent wireless signal in order to provide uninterrupted coverage and that they require AC power, usually thru direct outlets rather than power strips. Placement is key when trying to resolve both of these issues as wireless signals often don’t blanket an entire house or office and often power is not available in the exact position that the camera requires for optimum performance.

We tried a variety of wireless range extenders and access points from Netgear, Linksys, D-Link with mixed success. We also tried power line extenders which use your existing A/C wiring to extend your network’s range. Each of these has their own advantages; however we found that the Netgear power line units worked best.

One additional caveat is that in order to broadcast HD video over the Internet each Dropcam requires approximately one megabyte of upload capacity. As such, the use of multiple Dropcams in the same home or office, requires significantly more bandwidth than many providers offer in their standard packages. This appears to be improving as services such as Time Warner and others have been increasing their bandwidth to satisfy the needs of data hungry users. However, if you don’t have sufficient throughput you may want to skip to hardwired solutions with local recording capabilities or limit your viewing to lower resolution (ie: non HD) settings. To me, poor image quality is unacceptable.

Once you have conquered the obstacles outlined above the rest is simple and straight forward. In order to setup the camera you must first connect it to a desktop or laptop computer and once the initial setup has been completed the camera(s) can be simply dropped or hung in the desired location(s).

The feed from the Dropcam Pro was easily viewed from my Iphone and Ipad as well as from my laptop and desktop computers. The unit can also receive and broadcast audio, however not both at the same time. The incoming audio feed was very good, however when we tried to communicate with the monitored location the volume was rather low and varied significantly depending on the device used.

The cameras also offer a variety of motion sensitive settings that can send a text alert when movement is detected in targeted areas. The camera’s also proved invaluable when we received a call from a separate home monitoring service that notified us that an elderly relative had fallen and was unable to get up. We were able to immediately see what was going on and learn that they were o.k.